Con Artists – How To Protect Yourself From Them

HomeThink For YourselfCon Artists – How To Protect Yourself From Them 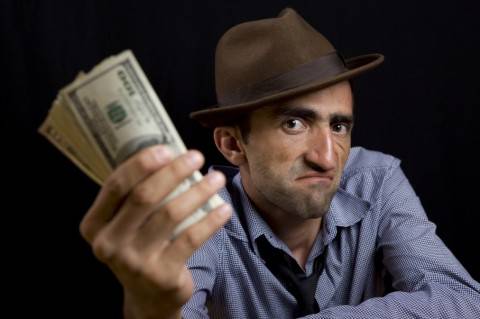 What is the best way to protect yourself from con artists? Simple answer – don’t play their game.

The first rule of con artists is that you can’t cheat an honest person. So con artists try to find someone who wants to get something for nothing – and then they will give that person nothing for something. So the person (or “mark”) will end up giving money to the con man, and get nothing in return.

You can never give an honest person something for nothing. So con artists will prey on that greed. And they look for people who want to get an easy windfall. They ‘feed the greed’.

Con Artists Promise To Give You Something For Nothing

So many of us have been conned and been taken advantage of. And a high percentage of us don’t want to admit it or talk much about it. It’s embarrassing to get duped. If I look back on all the times I’ve been conned, pretty much every time I was being dishonest and trying to get something for nothing.

Even lotteries, casino gambling, and sports gambling are forms of the con. These legal con games work by bringing in large volumes of money. The margins are pretty small, but they have a lot of money being wagered. The casinos and bookies may only be making 5% on the money wagered, but they can make so much money because of the high total of all the money being transacted.

A “long con” is a more intricate scheme designed to bilk one person out of a lot of money. A great example of the long con is depicted in the classic movie “The Sting”. The volume is low (only 1 person being conned), but the con artists can make extraordinarily high margins. In “The Sting”, they were going to make hundreds of thousands of dollars in the 1930s. As a result, the con artists were making a huge profit.

Some of the common well-known cons lately are the Nigerian letter scam, Three-Card Monte, the Ring Reward Con. The only people who will fall for these cons are those who want to get something for nothing. And they will get nothing for something.

‘Con artists’ is short for ‘confidence artists’. They get you hooked by putting confidence in you. And then because of the inherent drive in us, we instinctively put confidence in them. And then they have you – they come across as a loyal, trusted friend.

The con artists may even give you a “convincer”. Maybe they’ll let you win a small amount of money so you are even more convinced that you are going to make a lot more. Because of this convincer, you now have so much more confidence in the crooks.

If you want to learn more about how con artists really work, there was a fantastic, relatively unknown British TV show called “Hustle”. It ran from 2004-2012. I would suggest you watch the first 4 seasons, and you’ll learn so much about the confidence game. This show is quite clever and well written. It was about a group of con artists that were good guys. They only conned greedy, rich, immoral people who deserve it. Enjoy this show, and you’ll see how con artists “feed the greed”.

The Best Way To Protect Yourself Is To Be Honest

So what is the best way to not get conned? Don’t try to get something for nothing. Don’t play the con artists game. Be honest. And earn your money the old fashioned way. Anytime someone is offering you a deal that’s too good to be true – there’s no way it’s true.