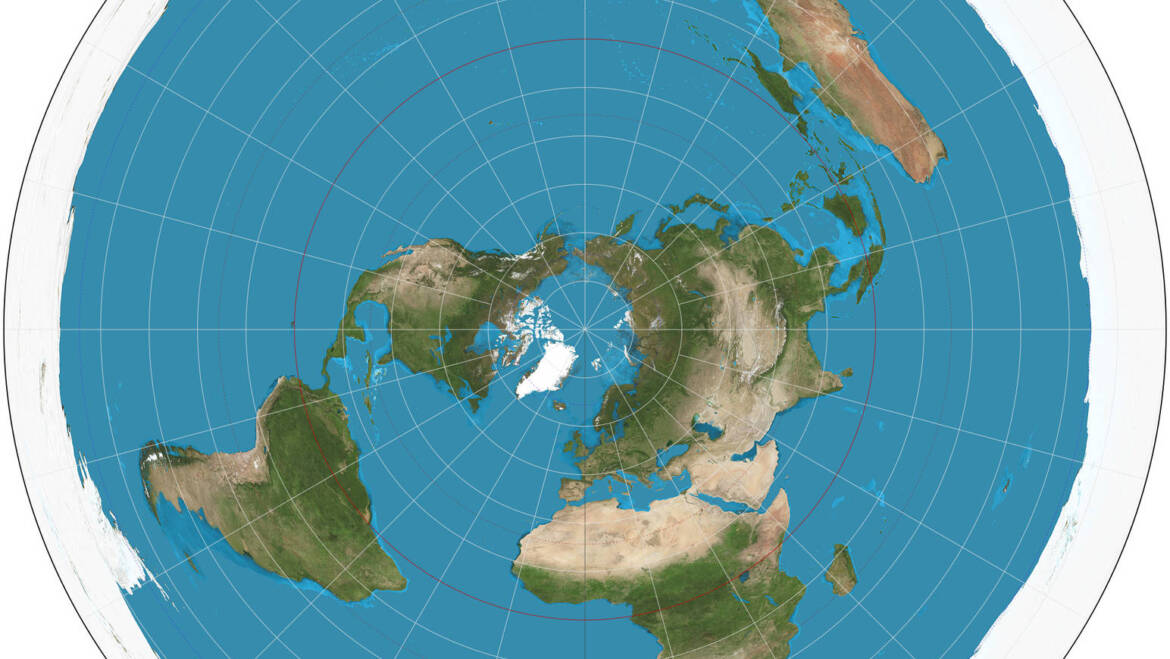 This question seems so ridiculous. Of course we live on a a globe – it’s not a flat earth. We’ve all been taught that since we were very young. The first day of kindergarten, you walk into your classroom and you see a globe of the earth. The earth is so obviously a globe. Or is it?

Recently I heard about the concept of a flat earth. My response was, “Are you kidding me? That’s the most ridiculous thing I’ve ever heard.” I was so skeptical. But I did start to explore. I started watching a few videos on YouTube. The more I watched and listened and learned, I started to see some validity to the flat earth. But it was still so crazy, I did not believe it.

If the earth was flat, you would just fall off the edge. But look at the photo at the top of the azimuthal equidistant map. You can circumnavigate the flat earth without falling off the edge.

All Truth Passes Through Three Stages

As I continued to read a few books and learn more, I became more convinced that we do live on a flat earth. I don’t want you to take my word for it. You should do your own research and discover the truth for yourself. I know I come across as a wacko conspiracy theorist. I’ve had people laugh in my face. If you had told me the earth was flat before I did any research, I would have thought you were crazy.

To help you get started on YouTube, you can watch this video and this video. There are thousands of search results for ‘flat earth’ on Google and YouTube. I’m not here to tell you that the earth is a globe or that the earth is flat. Figure it out for yourself and make your own decision.

As Arthur Schopenhauer said, “All truth passes through three stages. First, it is ridiculed. Second, it is violently opposed. Third, it is accepted as being self-evident.”

Why Do They Hide The Flat Earth From Our Education?

This question had me stumped. I couldn’t find any reason why they would do it besides money. And of course, money plays an important factor in why they profess the globe earth. But it goes way deeper than that. It’s really about power and control. And on a deep, deep level it’s about mind control.

From my years practicing hypnosis and being a student of the mind, I have learned a great deal about mind control.

‘Science’ – The Next Great Religion

About 500 years ago, a new religion sprang onto the scene. It was the religion of ‘science’. They had a new and better way of explaining the world. And they could prove their findings with equations and mathematics. It had to be the truth. They told you the earth was a globe. For thousands of years before that, everyone knew the earth was flat.

Now, ‘science’ told you that the earth was a sphere, and you were wrong about it being flat. ‘Science’ was now able to control your mind on a very deep level. If ‘science’ could make you believe that the earth is spinning around at 1,000 mph, and revolving around the sun at 67,000 mph, and the sun is moving through the universe at over 500,000 mph – they can make you believe anything.

Everything your 5 senses are telling you, everything your common sense is telling you is that earth is flat and stationary. The horizon is a straight, flat line. And you don’t feel like you are spinning faster than the speed of sound or whirling through space at unimaginable speeds. ‘Science’ is telling you that you are wrong – you can’t trust yourself; you can’t even believe your own eyes. So you stop believing in yourself. Now you are not smart enough to even know the ground you walk on. You have to bow down at the altar of ‘science’ to answer all of your questions. Now there is no way you can think on your own. ‘Science’ now controls you – you have to do what they say.

Free Your Mind From Its Prison

I didn’t write this to convince you the earth is flat. You can do your own research and make the decision for yourself. The reason why I wrote this article is to remind you to think for yourself. Don’t blindly accept the beliefs of those in charge. The government, media, corporations, institutions, academia have been force-feeding you lies for centuries. They have been controlling your mind – you just don’t know it. Don’t believe anything until you do your own research and find the truth on your own. Free Your Mind.

“If man uses the senses which God has given him, he gains knowledge; if he uses them not, he remains ignorant.”